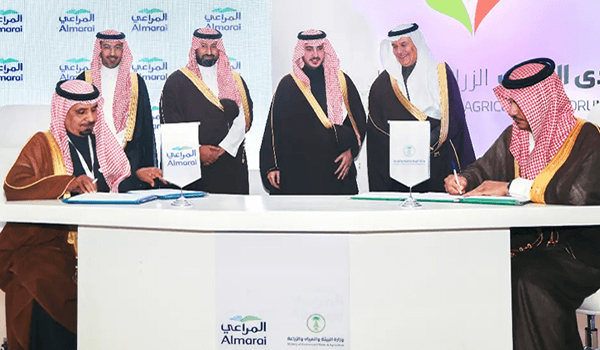 This came at a signing ceremony of an agreement between Almarai Company and the Ministry of Environment, Water and Agriculture under the patronage of HRH Prince Faisal bin Nawaf bin Abdulaziz, Governor of Al-Jouf Region, and in the presence of His Excellency Eng. Mohammed bin Saud Al-Kabeer, and the CEO of Almarai Company, Abdullah bin Nasser Al-Badr.

“The care that the government of the Custodian of the Two Holy Mosques and his trustworthy Crown Prince attaches to the private sector has directly contributed to the development of this sector to contribute effectively to achieving the goals of the Kingdom’s Vision 2030. To enhance food security in the Kingdom.” the Chairman of the Board of Directors of Almarai Company, His Highness Prince Nayef bin Sultan bin Muhammad bin Saud Al Kabeer, said.

Prince Nayef added that the investments include the development of hatchery production facilities to enhance the vertical integration of poultry supplies and will provide 720 new job opportunities, indicating that the poultry production facilities to be established through these investments in the Al-Jouf region are one of several facilities that will be distributed in several of the areas of the Kingdom to ensure that fresh chicken reaches the final consumer in record time, in addition to reducing the risks of relying on only one site for production, as this meets the goals of biosecurity for Almarai Company.

It is noteworthy that Almarai Company launched a similar investment a few days ago in the Hail region, at a value of 4.5 billion Saudi riyals, to expand poultry production, and this comes as part of an investment plan for this vital sector that was announced in May 2021, estimated at 6.6 billion riyals to develop poultry production, and the presence in sites different geography in Saudi Arabia to enhance the vital security of the sector, in addition to distributing the company’s contributions in economic development to the various regions of the Kingdom.