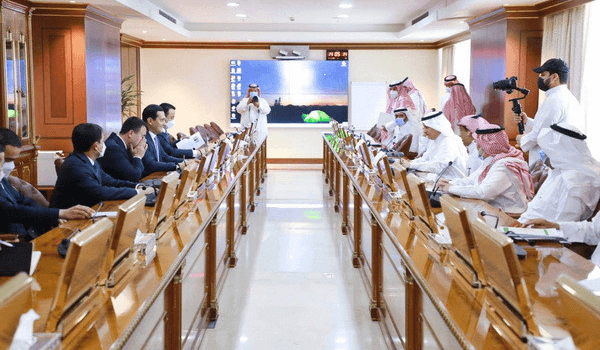 Deputy Prime Minister – Minister of Investments and Foreign Trade of the Republic of Uzbekistan Sardor Umurzakov held a meeting with Minister of Environment, Water Resources and Agriculture of the Kingdom of Saudi Arabia Abdulrahman al-Fadli.

During the dialogue, the sides discussed the possibilities for building long-term mutually beneficial trade, economic and investment ties between the two countries in the agricultural sector.

The parties noted the significant potential for attracting leading Saudi Arabian companies in this area to invest in the creation of high-tech greenhouses and fruit and vegetable processing industries in Uzbekistan with the prospect of exporting to markets with high demand.

The high interest of large Saudi companies, such as Savola Group, SALIC, Almarai, Tamimi Group, who visited Uzbekistan in January this year as part of a delegation of government and business circles, to establish production activities in the market of the Republic was emphasized.

An agreement was reached on the systematization of interaction on the development of specific investment proposals to attract Saudi companies to their practical implementation.

They voiced mutual readiness for further joint work to create conditions for enhancing cooperation in the field of agriculture. In this context, the parties welcomed the signing of a Memorandum of Understanding between the State Committee for Veterinary Medicine and Livestock Development of the Republic of Uzbekistan and the Ministry of Environment, Water Resources and Agriculture of the Kingdom of Saudi Arabia.

Following the meeting, further interaction algorithms were outlined to deepen bilateral ties in the field of agriculture.